Transitioning into a Career in Blockchain 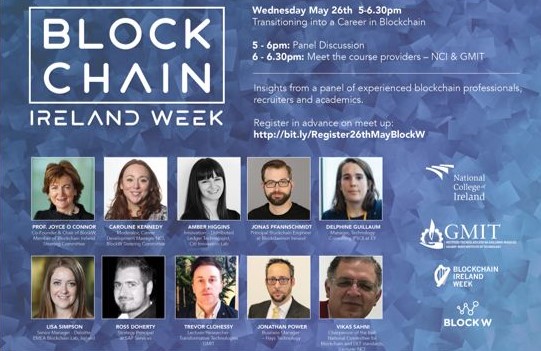 Transitioning into a career in Blockchain

Well, it is that time of the year again and another super exciting Blockchain week was and is in store for all participants. While this year all events were hosted online, the value gained was just as exciting as the past face to face events. We have all become experts at feeding and consuming information via video / online thanks to Covid.

The event I chose to focus on is one that was hosted by an incredible group of women, I have had the honour to get to know since their first event in September 2018, BlockW. The event title was also of interest to me given the fact we work with candidates who are actively looking to transition into Blockchain. The panel line-up was fantastic with each person adding lots of value to all the attendees.

Some brief notes from the event are below:

Some problems/issues that have come up in Blockchain

Jonas: There are a couple of issues 1. Blockchain and DLT (Distributed Ledger Technology) is still in it’s very early days. Some problems that are arising are around the scaling debate. Most Blockchains are relatively slow compared to centralised systems but it is being worked on. 2. It’s still not easy for people to use Blockchain and DLT. There is lots of work to do on it from a user friendliness perspective, however companies like Paypay, Revolut etc are moving into Blockchain so will improve it to make it more consumable for end users.

Ross: There is lots of association between Blockchain and Bitcoin. There is work to do on demystifying Blockchain and getting the message out that it is more than cryptocurrencies.

Amber: Blockchain technology isn’t something that is as widely understood as we would like it to be. We want to help people understand when it is a solution and when it is not!

Question from the audience around Gamestop using NFT (non-fungible token)

Jonas: NFT has just come along over the past couple of months. At the moment it is a playground where people test. It will potentially evolve into something bigger other than gaming. It is too early to make any real assumptions.

Trevor: The biggest barrier is demystifying what Blockchain is and to see what it is and what it isn’t.

Discussion around the future of Blockchain

Lisa: within Financial Service, there is so much happening from a regulatory perspective, there are announcements from big Global banks. Blockchain will fundamentally disrupt Financial Services. There are not a lot of people have skills in this space so lots of opportunities for people coming out of college looking to get into this space.

What roles are you actively recruiting for?

Lisa: Deloitte are looking for both technical and business candidates. On the development side, a knowledge of protocols, smart contracts are a plus and understanding of integration between applications and cloud etc. They should have strong development skills. On the business side, someone who has a passion, interest, understanding of the value Blockchain can bring to clients would be ideal.

Jonas: similar to Lisa. We are hiring for mostly Engineer. They do not need to have huge Blockchain experience, but they will be very interested in the space. Blockchain is very young. We hire for DevOps, Engineers, Community Managers, Product Managers to drive Blockchain projects forward, Smart contract Engineers/Developers. The majority is solid Engineering.

Jonathan: same as the other. DevOps, Dev Engineers. Someone coming into the Blockchain world with qualifications will stand to candidates.

Question from the audience - What constitutes an interest in Blockchain?

Lisa: someone who sees the value in the space, and who has read up on it. You are someone want to find out the latest trends and keep up with them etc. That is having an interest or passion.

Jonas – for engineering, if a candidate has looked up and played around with tech in some form

Top tips to transition into Blockchain

Vikas: focus on – do you want to be a developer or deploy Blockchain? Programming Languages like Python would be useful along with other basic programming courses.

Get a basis in Blockchain 101’s. Pick a couple of industries “where could BC drive value for this industry and where will it not?”

We started working in the Blockchain space in 2017/2018 and have seen a shift from pure R&D to pure Engineering and now in addition to these, there are more roles opening on the business side. For example, we are taking on a new client who is looking to recruit for technical Developers and back-office operations roles.

In reality, Blockchain is still in its infancy so recruiting for roles like a Blockchain specialist is difficult to find.

Instead of focusing on the technical aspects of a candidate i.e. do they have exposure to Hyperledger Fabic or Ethereum, instead assess if they are bright, can they pick things up quickly and will they complement my team. I cannot emphasis enough the importance of finding people who will have a good cultural fit for your company and who are totally engaged and enthused about the technology and your company.

Want to learn more about Blockchain? Why not avail of a free Skillsnet Blockchain Learning Pathway course to build your knowledge (CLICK HERE)