The Impact Of Brexit On The Irish Jobs Market 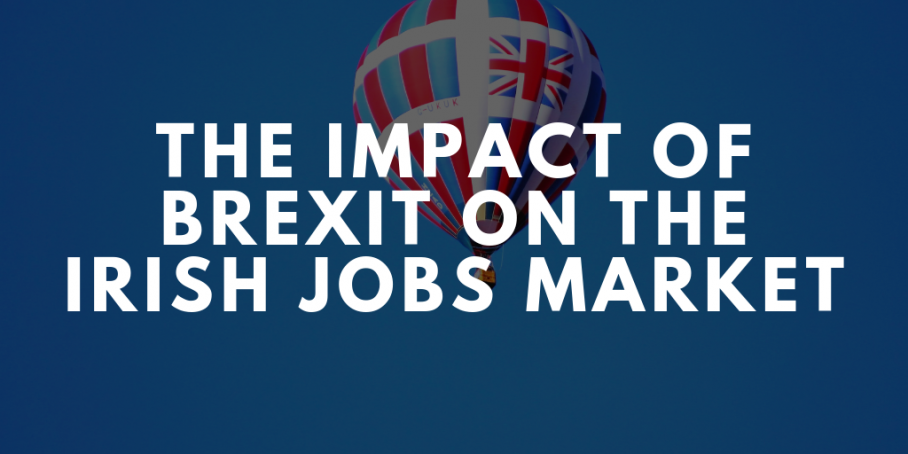 If you joined Laura & Paul for the recent episode of the Your Pursuit Of Happiness podcast, you would have heard them discussing how Brexit impacts upon the Irish jobs market and how you should react.

Have a listen to the episode and then let's take a look at some of the key questions . . .

The obvious impact that people have seen is an increase in demand for talent, so I think three sectors maybe in particular, insurance, legal, the fund management side and e-money payments institutions all have very definite reasons to be setting up over here. New companies setting up clearly brings new jobs with it, so you're seeing an increase in demand, in terms of the jobs market and the supply of jobs is increasing.

The other impact that people don't think about quite as much is the increase in the supply of talent. Really, two markets I suppose, and actually just to go back a bit to put it in context, Ireland's economy clearly has been doing well over the past few years. Even pre-talk of Brexit, Ireland's economy was improving from a low, as everyone knows. Certainly, we've seen a lot more Irish looking to come back and a lot more interest in Ireland as a location. Brexit really poured fuel on that fire, I suppose. What we expected when the Brexit vote happened and what we saw absolutely was Irish in the UK looking to come home. It was an absolute no brainer, it was bound to happen.

What we probably didn't see as much of, and in hindsight should have thought about it a bit more and are seeing a lot more now, is non-UK EU nationals living in the UK, in London, or wherever else, who no longer really want to be there because of Brexit. As much about uncertainty as just in terms of it was a big cultural vote, I suppose, and there was a lot of stuff about that. The two big things that we've seen have been clearly an increase in demand, in terms of people looking to hire and that's really been Q3, Q4 of last year and, obviously, Q1 of this year has been very busy. But there has been an increase in the supply of talent with specialist skills in particular.

Will there be an impact on specialist role salaries?

Yes. On specialist roles definitely. If you're setting up, normally you're going to be looking for something to do with risk or compliance, or something to satisfy a CBI requirement. The hurdles have increased for that so boots on the ground and people in new setups, the requirements for actual numbers of people there have increased. Normally you're looking at risk and compliance as the two main areas. A lot of people are looking for people with experience dealing with the Central Bank in Ireland and there is only a finite number of those people. So certainly it is having an impact on salaries and salaries are increasing in those areas.

But some clients have looked outside of that and haven't seen that as an absolute requirement. Then you can start to look at other talent pools, so people who are moving over for different reasons, Brexit related and otherwise, don't necessarily have CBI experience but do have strong compliance and regulatory experience across the EU and regulations are essentially kind of harmonized in an awful lot of sectors anyway. It is certainly pushing up salaries for some, but I do think there's an opportunity there to look outside of people with that specific experience.

But the other thing would be the specialist skills, whereas in the past if a client was setting up a new function that wasn't prevalent in Ireland or anything like that then they'd maybe have to look at getting someone who was 50%, 60% of what they were looking for, ideally on the spec. Whereas now, the opportunity is there to import talent, almost. Those roles are a lot more competitive than they used to be.

We are at full employment now, so there is a bit of a perception out there that you go for an interview and you can walk into a job.

It's not really like that. It's not a case of there are only one or two applicants for a job and that's it, regardless of what you hear in the news or what people are saying. Candidates, job seekers in particular, need to be very aware of that. In our experience, that's just not the case. With very, very few exceptions and particularly in those specialist roles, they're specialist for a reason because they need specialist skills. If you're in risk or compliance or any of those particularly hot areas it's not a given that because you have an interview you're going to get a job, you need to put the work in, you need to listen to our podcasts about interview prep and whatever else. Yeah, you're not walking into something just because we're at full employment and Brexit is driving up demand. It will be interesting to see what happens over the next few months with this extension that's happened. But no, it is still really, really competitive and people need to bear that in mind.