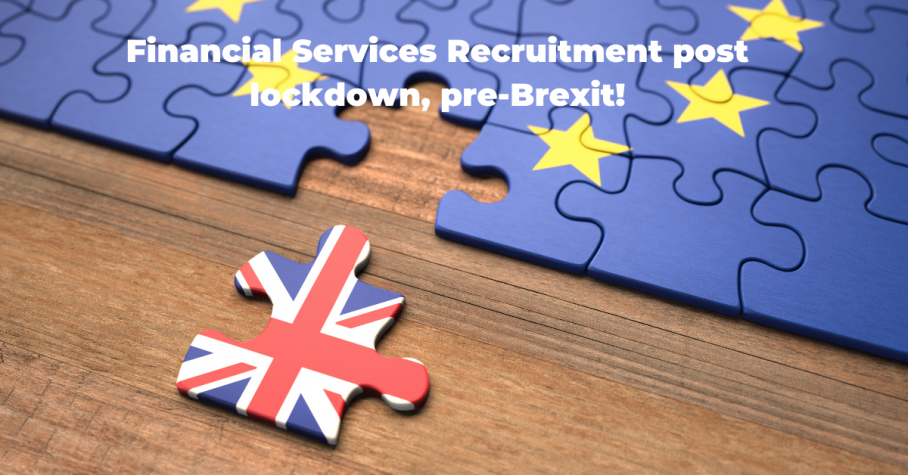 Tune in as Paul and Laura discuss FS recruitment during these times. There will answer questions

Welcome to your pursuit of happiness, the podcast for people working in the Irish FinTech and financial services industry.

Hi, everyone. Welcome to your pursuit of happiness. I'm Laura. I'm Paul. Today we're going to discuss financial services recruitment, post lockdown and pre-Brexit. Is that right, Paul? That's right. As usual, I'm going to question you. So let me kick it off. What are you seeing in the financial services market at the moment and has anything changed over the course of the pandemic?

Yeah, so when the pandemic started, and lockdown happened and everyone scrambles to work remotely back in March, the first thing that happened was jobs just disappeared completely for the majority of places of pretty much all sizes. types in everything else with some exceptions. There were some clients that would have moved very, very quickly to remote interviewing and remote onboarding. And those guys really kind of led the way I suppose. And were able to be very agile in terms of how they reacted, which was, which was great to see over the course, another pandemic, you would have seen a little bit more of that type of thing happening. But certainly in the past, I suppose six to eight weeks, in particular, from kind of mid-June, early June, even onwards, a lot of those would have sharpened up, in terms of recruitment, have started to talk to us, again, have started to hire again. And I think it's driven by a few different things. One, I think, is that there have been companies that have actively recruited all the way through the pandemic, pandemic, and they have been taking people from competitors who do need to be replaced. So there is kind of natural churn in the market. The other one would be, and certainly this is true for us like we left at the start of March. I don't think anyone told you to be mid-August and we'd be seriously Then, you know, working from home. And I think a lot of clients are realizing that this is going to go longer than anyone had expected. So have to get back to some sort of normal, and that means recruitment. So I think those are the two changes that I've seen, certainly in the last few weeks that have seen a real change in the recruitment market. So a lot more happening than there would have been before. I think very, very recently around the August bank holiday. I don't think a lot of people were sure how it was going to go in terms of you know, summer is normally quiet enough. In terms of recruitment, a lot of people were expecting that to be a lot of pent up demand and that it will be quite busy over the summer. Definitely the two weeks around the August bank holiday where as quiet as I've ever seen, it's like half the country went over to the west coast but it's definitely getting back to some sort of normal now, which is which is great to see.

Yeah, we're definitely seeing a pickup. Are there any particular areas that are hiring at the moment?

There's a few different areas. So certainly around payments and Imani will be two areas that we've seen that were particularly busy prior to the pandemic and have started to get busy again. So there's still a lot of companies that are looking for emoney licenses with CBI, a lot of that work is kind of Brexit driven. There's still a lot of activity around the general form management manco sort of space in Dublin, we're seeing an awful lot happening in that area in the usual areas. So anything with a anything with a dp type of function or anything with anything yet anything around a designated person, particularly anything risk reg compliance, etc, are busy again, generally speaking, the operations side of things is probably where we're seeing the most volume. And that tends to be the kind of more junior levels and that's where then kind of fund management front admin, even more general kind of banking and investment banking as well so they'd be the main areas So we're seeing, I think you're probably seeing a bit more on the tech side, which is busy enough, I think all the way through the pandemic.

Yeah, it definitely hasn't stopped. which is which is great. Yeah, from our perspective, there is always, a demand our tech people

I wouldn't say there's kind of anything in particular sounds nice. I'd say it's busier after more junior enter the markets up to maybe manager level, a manager level, generally speaking around a kind of 6070 k mark. There certainly have been a few opportunities at higher higher levels, you know, Associate Director, director or VP depending on where you are, and and a couple of new functions being set up a couple of new operations being set up but they're moving a lot slower and uncertainly less often, which is typical. Pick up in that sort of level has been a little bit slower than ours at the more junior end.

And finally, what impact is Brexit having now?

Yeah, Brexit was forgotten about to think for a few months with everything that everything else that was going on. So Brexit is very much back on the agenda. And as I said, a couple of minutes ago, I think particularly around fund management payments, see money, those sorts of areas, we're seeing a real impact. And a lot of that is driven by and companies based in the UK that will need access to EU markets post Brexit. Obviously, there's a lot of ups and downs. You know, if you were to talk to me maybe six weeks ago, two months ago, after the latest round of negotiations with the EU, I would have said Brexit is a near certainty that we'd have a hard Brexit. You know, there's obviously an awful lot of negotiation still to happen, but certainly, what we're seeing an awful lot more we're hearing from people that we work with that would notice face better than no stuff. inquiries are increasing again. There isn't a huge amount of time left to go. So, I mean, if I was sitting there in the UK and from talking to clients that we've worked with what they're hearing over there is that people are getting very, very nervous again. So there is going to be demand for anything that's related to payments, anything that's related to compliance and REG and investment oversight and on the management side. Those two areas, I think, for what we do anyway are going to be particularly busy, which is great for Ireland, because, you know, we're we're going to be the only English speaking country in the EU left after Brexit. I think we're a very friendly country to come to I know you do a lot, probably more than more than the finance side and technology in terms of bringing people over. Yeah, people seem to be quite happy to come to Ireland and yet to go destination. So I think we have so much opportunity in that space, that it's it's a really good time to move over to look at setting up operations and you know, Certainly for anything that we've done even through COVID, or people that we're speaking with that tremendous in terms of setting up or scaling up operations, it's something that we're pretty bullish around in terms of being able to get talent. I think one of the things that we tend to see is particularly around compliance roles and while they are tricky, and there isn't as many people on the ground, I think if you if your work with a good recruiter, or if you're setting things up properly, and know what you're recruiting for, and what's your kind of value proposition is and stuff that we do every day with clients. I think there's really good opportunity. There's really good people here. So it's not it's not as big an issue that some people would have you believe what Yeah, Brexit is very, very much back on the agenda.

Yeah. Sounds like we've a very busy year ahead of us!

Thank you, everyone, for tuning in.

Thanks for joining us today on your pursuit of happiness. The podcast for people working in the Irish FinTech. financial services industry.