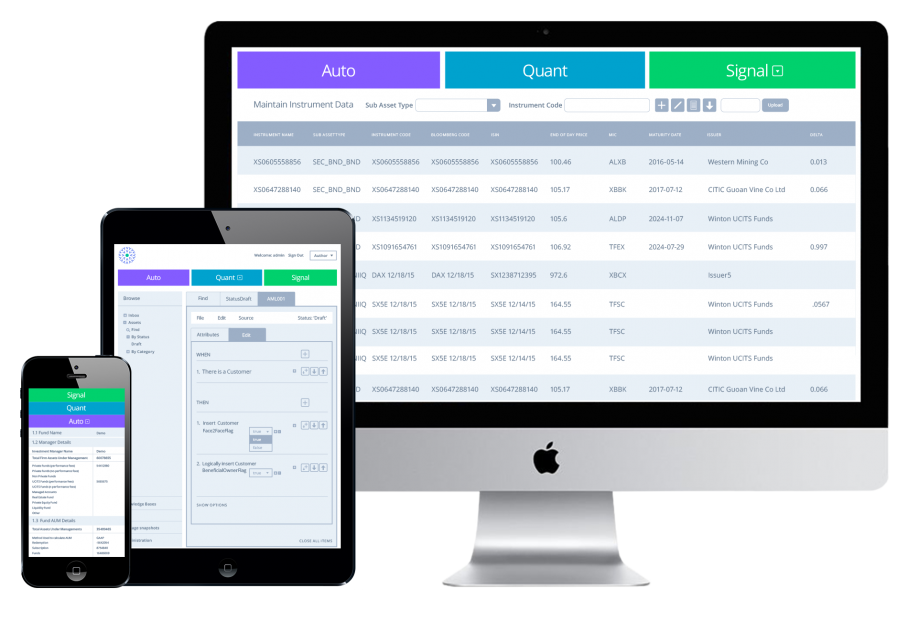 In this recent episode of the 'Your Pursuit Of Happiness' podcast, Paul talks with Claire Savage (COO) and Lorraine Lyons (Senior Business Development) from Irish financial services success story, AQMetrics, to learn a little about the company's story and to discuss new opportunities opening up at the rapidly-growing Fintech.

AQMetrics was founded in 2012, and at the very heart of the company they are a software company, servicing the financial services industry.

The company was born out of the strong market need to create a single consolidated, one-stop platform to provide risk monitoring and regulatory reporting services to regulated financial institutions.

The founding team had spent many years in FinTech and RegTech (although it wasn't called that then) developing solutions for large banks.

The core with AQMetrics was to move away from that historic model of providing on-premise software and to provide a true cloud solution with a single build and source of data for risk and regulatory reporting for regulated financial services firms.

Rapid Change In The Regulatory Environment

RegTech is a relatively new area. Obviously an awful lot of change in terms of the regulatory environment, would you see that as something that will continue or do you think we're at a stage now, in terms of regulation where it's stabilizing a little bit?

The feedback from AQMetrics’ client firms is that there's been a full decade of reform and it's been pretty onerous for these firms, but now there a slight pause in the amount of regulations, which are coming down the line, leading to optimisation of these RegTech solutions.

This means that anyone who put in tactical solutions over the last 10 years is now looking to be more strategic.

They're pausing to catch their breath, and they're definitely optimising what they have and consolidation.

RegTech's here to stay for sure, it's just the onslaught of new regulations is somewhat slowing down.

A Holistic Approach To Regulation and Risk.

They are regulated in Europe under ESMA and can passport throughout Europe.

Due to Brexit, once the UK leaves the EU, they've also been authorized now by the FCA in the UK.

The company understands effectively what it's like and what's required to operate as a regulated firm.

Also, they became regulated in order to offer all risk management and reporting services to their clients, including those ones which require clients to have a regulation status.

It was to ensure they had that breadth and that AQMetrics could provide an automated service across all regulations and markets, that there weren't any jurisdictions or boundaries to their software.

AQMetrics have a truly global client base.

They have clients in the United States, including a number of very large US financial institutions. Indeed, two of the top world's largest fund administrators are clients of AQMetrics.

Then, obviously, they have a very solid European base, given their headquarters are in Europe and a lot of their early clients are based in Europe.

The company is also working with a number of clients starting to look at Asian regulations, particularly coming out Singapore and Japan.

Many of their team were drawn to AQMetrics by the positive culture and by what the company was building for the financial services ecosystem. Both the team spirit and the company values are aligned, where everyone has the same vision and they're working towards the same mission.

For example, they recently ran internally a company stand-up, where every member of the team across all of the different functions, from technology to the engineering team, sales, customer success, and the regulatory reporting team, all talked about their role or mission, their vision, and their values at AQMetrics. Everyone found it really valuable to hear from all of the functions, to reinforce that they're all traveling in the same direction. It really showed the positive team culture and comradery.

It was very important that the company had that embedded knowledge within the team.

AQMetrics is looking for people with native or fluent French and English.

There is a very flat structure in AQMetrics and within the sales team.

New sales team members would sit working alongside Lorraine and her colleagues.

There will be sales team members both in Dublin and in London.

The sales team are very much actively supported by the customer success team who have the deep embedded knowledge.

It’s not a big organisation with multiple tiers of hierarchy, it's a small team currently based in Dublin and London but with a view to expanding throughout Europe with the upcoming opening of the new French office.

Until now, AQMetrics been largely driven by their core sales team members. In order to expand to new markets the company needs to bring people with new language skills.

It also needs to bring more people in so that a lot of the strategic relationships and the pipeline opportunities that exist can be fully supported. AQMetrics is finding itself in a fortunate situation where it is getting a lot of referrals from existing clients but the team is also very conscious that they need to further develop the markets they’re going into. The opportunity has come because there's so much opportunity in existing markets but the team also want to develop into new markets.

What Does Success Look Like For Someone Joining AQMetrics In A Sales Role?

What's really important for all sales roles is not just sending the best emails and generating leads and making the calls, there's also a number of other ways that you can do that, and there's great support structure within the team at AQMetrics.

The sales team have great access to leadership and also the ability to have a technical coach to learn about the regulations and the products offered by AQMetrics.

That's priority number one - knowing your products when you're going out to market.

Being based in Maynooth and having everyone around you, it’s great, as someone in frontline sales, to have all the support resources directly beside you or across the hall, rather than in a different building or different country like you’ll find in much larger organisations. It strengthens the team when everyone is nearby and closely aligned with the culture of the organisation.

There have been some customers, particularly where they're client referrals,  where the sales cycle can be as short as one or two short phone calls. Some of the smaller hedge funds can be closed that quickly.

Where you're dealing with the world's largest banks, you need to go through their third-party procurement phase, which can take a bit longer, but AQMetrics have been equally successful in navigating those larger process and their third-party risk management elements.

What Are AQMetrics Looking For In These Sales Roles?

Better qualified leads produce better value and movement through the sales pipeline. Hiring great SDRs with the ability to grow within the company and move towards other roles over time is important.

It's the ability to take ownership as well of the end to end sales process. The company doesn't have a very formal separate insides sales structure, where one group is generating leads and the other group is closing leads. For this level and for this role they'd like to see candidates who can take ownership for the end-to-end lifecycle. Generate leads, effectively inform those leads of the value of AQMetrics, and take them through the sales lifecycle.

Everything is fully documented in the sales playbook and there is lots of support.

Being coachable and having a curiosity for the market and a passion for the product and the sales itself is really important.

Ownership is very close to the team’s hearts and it's one of the company values that people are actively encouraged to take ownership and to drive themselves onwards. The leaders are there to support you and to provide what you need along the way.

What AQMetrics doesn’t want is for people to feel restricted or that they don't have an opportunity to develop.

You’ll need a certain amount of resilience to go and work with a scaling company like AQMetrics but we think the benefits that you get from being able to take ownership of your opportunities will lead to greater success for you and the company.

If you want any information or are interested in one of AQMetrics' roles, get in touch with us at Top Tier Recruitment.